Verona vs. the Doldrums

VERONA VERSUS THE DOLDRUMS 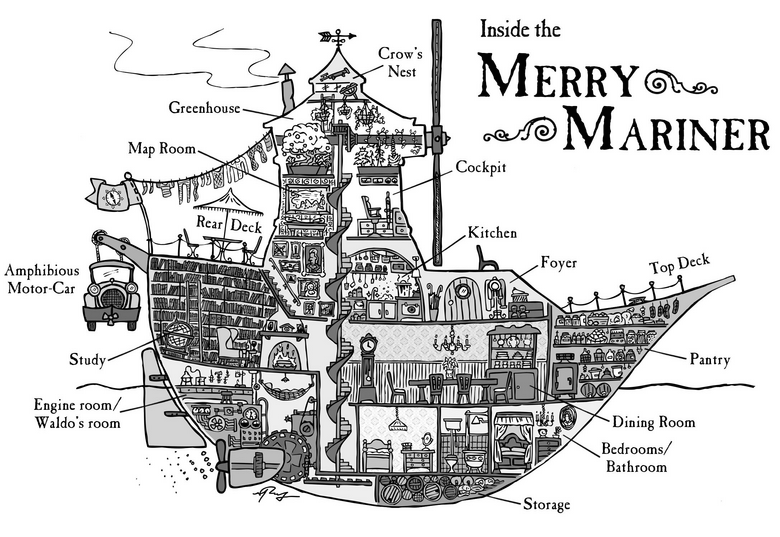 Verona Wicklow never thought the day would come, but it did: she’d had quite enough of the open sea.

She stood at the bow of the Merry Mariner, the adventuring windmill-ship aboard which Verona and the rest of the intrepid family Wicklow made their home. The wind blew swift and strong, churning the ship’s windmill-sails around and around, propelling them forward through the steady waves. Verona kept a hand on her lucky yellow hat so it wouldn’t fly away.

On any regular day, the sight of the endless horizon would have filled her with a joyous anticipation. Anything could lie beyond—strange lands to be explored, wondrous cities to wander, curious peoples to encounter, exotic foods to taste! There was adventure to be had! Each and every morning, Verona leapt out of bed at dawn’s first light, ready to tackle whatever the new day brought, and each night she fell asleep imagining what new marvels might come with tomorrow. She intended to be a famous and important explorer, and what better place to practice her profession than on a windmill-ship which sailed ‘round the Seven Seas?

But several weeks had now passed since they last saw land, another ship, or indeed anything at all besides sea, sun, and the empty horizon stretching in every direction. Verona was navigator aboard the Merry Mariner, and she knew that they currently sailed through the barest expanse of the High Sea, the largest and widest of the Seven Seas. At their current speed, it would be over a month before they saw land again. Verona wasn’t certain she could wait that long.

“How am I to become a famous and important explorer,” she said to herself, “if I’m not able to do any exploring?” Every minute that passed felt like another minute wasted. She wished she could be thrust up like a firework through the air, blasting towards the next adventure without a moment to lose. “This old ship is so slow,” she sighed. She raised her arms up to the sky. “Ahoy there, wind!” she cried. “Can’t you blow us a little bit faster?”

No sooner had the words left her lips than Verona felt a shifting beneath her feet. The windmill-sails creaked and the ship’s wooden hull groaned.

“Eureka!” cried Verona. She could hardly believe it. “Who knew the wind had ears?”

But something felt wrong. The waves came gentler now, not faster. The ship’s windmill-sails slowed, the sea calmed. The gusty wind dwindled to a gentle breeze, then a mere draft, until finally it died altogether with a hush.

The sea wobbled and rippled and smoothed itself out like a soft blue blanket. The Merry Mariner rocked to and fro, until finally it slowed to a complete and utter stop.

The windmill-ship couldn’t very well make any progress without wind. Once so friendly and full of promise, the horizon now taunted her, wide and empty, without a speck of land or ship or even fish to be seen in any direction. The seconds ticked by in Verona’s head like thumping drumbeats. Each passing moment drifted up and away, slipping out of her grasp, never to return.

Verona turned and dashed inside the Merry Mariner to tell her family the awful news.

She burst through the front door and past the foyer. Pappa Wicklow, Verona’s father and the ship’s captain, was just coming down the spiral staircase from the cockpit. He peered at her from under his bushy eyebrows.

“What’s the matter?” repeated Verona. “The wind is gone!”

“Oh, yes,” Pappa nodded. “That’s true.” He continued down the stairs to the study, whistling tunelessly.

“But what will we do?” Verona cried after him.

“What’s all the hubbub here?” called a voice from the kitchen. Mamma Wicklow poked her head out. Mamma was Verona’s mother, the ship’s cook, and the proprietor of the Merry Mariner.

“There’s no wind,” answered Verona. “We can’t sail without wind!”

“Humph,” said Mamma. “Sometimes the wind blows, sometimes it doesn’t. That’s no reason to make a fuss.” She returned to stirring her stew-pot and checking the oven. The kitchen always rang with the sounds and smells of a dozen dishes baking or boiling or frying, usually topped by Mamma’s loud singing of songs from the old country.

“Good!” said Mamma. She wiped her hands on her apron. “Now that we’re not being jostled about by waves, I can finally try some of your grandmother’s more delicate cake recipes.” She pulled an old hand-written book from a shelf and began flipping through the pages.

“We’ll be marooned here forever,” Verona mumbled, staring blankly out the kitchen window at the desolate blue beyond. “I’ll go mad with sea and sun and die right here on this very spot, an old hag who never explored anything ever again in her whole entire life!”

Mamma clicked her tongue. “Don’t be foolish,” she said. “You’re not even thirteen yet. Now, how does lemon-squash tart sound?”

“How can you even think of cakes during a catastrophe?” cried Verona, and before Mamma could answer she raced out of the kitchen and down the spiral stairs to the study.

Sagging shelves bursting with books lined the study’s walls from floor to ceiling. Silvery rays of sunlight streamed from large windows, through which one could normally watch the gentle sway of waves splashing against the hull. Now, however, Verona felt the study as eerily still as a tomb. She could almost imagine the shelves pushing in, trapping her forever…

Verona looked up. Her father had already lit his tobacco-pipe, poured himself a glass of brandy, and settled into his comfortable reading chair with a large book. “I found something that might pick up your spirits,” he said. “Have a look here!”

Verona went over and peered at the book in his hands: The Compendium of Nautical Disasters, Volume Three. “In sailor’s parlance, the absence of wind for an extended period is termed ‘the doldrums,’” Verona read aloud. “Sailing-ships with no other means of propulsion can be stranded, their crews often struck mad with Cabin Fever, helpless until the winds return. The longest doldrums on record lasted…four hundred years?”

“Hm,” said Pappa, scratching his mustache. “Now I can’t remember why I thought this would make you feel better.”

“Four hundred years,” muttered Verona. She felt dizzy, and put a hand on the mantel to steady herself. The large mantel clock stared at her with its one unblinking eye. The clock went tick, tock, echoing in the silent study.

“Oh, I’m sure the wind will be back,” said Pappa. He settled into his chair and puffed on his pipe. “In the meantime, we ought to enjoy this lovely silence, wouldn’t you say? It’s the perfect time to do some thinking about the universe, or life, or…well, time itself!”

Verona grabbed the mantel clock in both hands and brandished it at Pappa like a blunt weapon. “Time is wasting!” she gasped, and dashed out of the study and down the spiral stairs to the bottom deck.

Verona paced up and down the downstairs hall, the mantel clock tucked under her arm. “There must be something we can do,” she muttered. “Something we can do to bring back the wind, to force it to come back. But what?”

Out of their bedroom and down the hall tumbled Fritz and Felix Wicklow, the ship’s rope-masters. Verona was the eldest of the Wicklow children, and the twins came next.

“Isn’t it brilliant?” said Felix with a big grin. “No wind means nowhere to go!”

“Nowhere to go means everything to do!” agreed Fritz. They each carried armfuls of this and that—fishing nets and coat hangers and ski poles and twine and hammers and all manner of mischief-making equipment.

“We’re going to catch an electric octopus and train it to lurk under Mamma and Pappa’s bed,” chuckled Felix.

“But first we’re going to board up the crow’s nest and make it our Impenetrable Fortress of Death,” said Fritz, and before Verona could say another word they had disappeared up the spiral staircase, hooting and cackling. She heard banging and a loud crash from upstairs, followed immediately by Mamma roaring at them.

“I don’t know why I thought they would be of any help,” Verona muttered.

“They never are,” came a gloomy voice from the engine room at the very end of the hall.

Verona peered through the doorway. Waldo, the second-youngest Wicklow and the ship’s engineer, sat at his workbench, tinkering. The engine room was also Waldo’s room. Ordinarily, it clanked and rattled with gears, wheels, belts, and other mechanical instruments which pulled power from the ship’s great windmill-sails, but as there was no wind at the moment, all the machinery stood still and silent. Verona could hear her own heartbeat. It reminded her of the dead flies which sometimes collected on the windowsills—one day buzzing with activity, the next, stiff and lifeless. She shivered.

“Why are you holding a clock?” Waldo asked. His voice echoed across the room.

Verona ignored the question. She hurried over to Waldo’s workbench, where lay scattered hundreds of mechanical bits and bobs, tools and instruments, and half-finished inventions, contraptions, devices, and apparatuses of every imaginable sort. She began to rummage through it all.

“Oh, sure!” Waldo said, dropping his wrench. “Just come right in and make a mess!”

“Waldo, you’re quite clever,” Verona said. “Can’t you invent us something to bring the wind back? What about this?” She held up a device with a propeller on it.

“That’s a vegetable peeler, and it’s broken,” said Waldo. He yanked it from her hands and pushed her away from his workbench. “I can’t control the wind,” he continued, “and even if I could, I wouldn’t. I’m glad it’s gone! Without the waves knocking us around I can do some work on smaller things, like this wind-up toothbrush. And besides, Abbot won’t get seasick.”

Verona threw up her hands. “What’s that supposed to mean?”

Waldo held up a large shoe. Peering closer, Verona spotted two gleaming eyes inside. Slowly, skinny limbs unfolded one by one, and there emerged from within the shoe a sizeable hermit crab. Waldo set the creature on the floor, but it was shy and followed him closely by the heels.

“Go away, I’ve got work to do!” said Waldo. He shooed her out of the engine room and slammed the door.

Verona clutched her clock and sighed. “Are we, too, destined to be hermits,” she wondered, “living on this shell of a ship until we meet our watery graves?”

She went back out on deck, dragging her feet and feeling melancholy. The sea stretched out like a big flat puddle. Verona spat over the side. It plinked into the water, and the ripples spread out in endless rings, traveling farther than she could see.

Just then, tiny footsteps shuffled across the deck behind her. It was Pip, the very smallest Wicklow child, holding a colorful pinwheel. He blew into it and it spun around. He giggled and blew again, and it spun again. He giggled.

“If only I were young again, like you, Pip,” said Verona. “Then I wouldn’t have a worry in the world.”

Pip looked at her with his big eyes but said nothing. He blew into his pinwheel, and it spun around.

Verona sighed and looked out at the vast, empty sea, as still as a stone.

Want to find out what happens next? Visit www.themerrymariner.com for the rest of Verona vs. the Doldrums, as well as full illustrations, maps, cross-sections and much more!